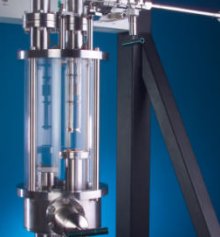 Gravimetric analysis of sorption processes uses a sensitive balance to record changes in weight of a sample as the environmental conditions of the sample are varied.

Typically, a solid sample is held at a fixed temperature, and a Sorption Isotherm is measured, by varying the partial pressure of the sorbate.

The gravimetric measurement of weight gives a continuous direct indication of the amount of sorbate interacting with the sample.

For each value of pressure, the weight of the sample is monitored until the sample reaches equilibrium with the gas or vapour. This weight value, at equilibrium, then gives a point on the sorption isotherm.

A particular advantage of the gravimetric method is that it is possible to vary the pressure in discrete steps, so that the sample equilibrates at a fixed pressure. The relaxation of the weight after each pressure step gives important additional information about the kinetics of the sorption process, in a form which allows calculation of the diffusion properties of the sorbate-sorbent system.

It is important to note that the measured weight includes contributions from various effects, in addition to the amount of sorption. To obtain the mass of sorbed gas, it is necessary to eliminate or correct the weight for these additional forces, which may include:

Fortunately, the Gravimetric method can be used to directly measure the sample density using an inert gas, for accurate buoyancy corrections. Careful instrument design or blank measurements, under identical conditions but with no sample, can eliminate the other effects. This makes gravimetric instruments very precise and versatile.

There are two broad types of gravimetric sorption analyser:

Static gravimetric sorption instruments, such as the IGA-001 for gases and the IGA-002 for vapours, give a direct measurement of the sorbate partial pressure. The static method is particularly suitable for kinetic measurements, because the pure gas environment gives the maximum possible delivery rate of molecules to the surface of the sample. Dynamic methods often use a carrier gas which imposes a diffusional limitation to the transport of the sorbate, and which becomes increasingly significant as the partial pressure of the sorbate decreases.

Similarly, competitive sorption effects due to carrier gas are avoided, which can affect the equilibrium sorption curve.

To obtain the zero point of the sorption isotherm, it is necessary to use vacuum pumps to evacuate (or outgas) the system, which adds to the cost and complexity of the instrument. However, the possibility to use a high conductance connection to the vacuum system makes outgassing take place rapidly, in contrast to volumetric systems, where large volumes must be avoided. 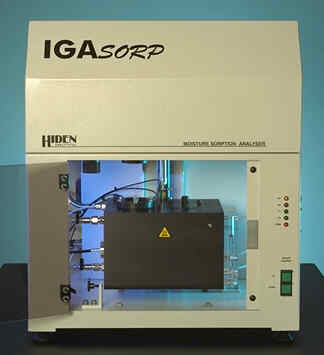 Use of a dynamic flow of gas and vapour is useful for a wide range of applications.

In many cases, the flow contains a mixture of a species of interest with an inert carrier gas, which ensures a constant supply of the sorbate and removes desorbing compounds.

This can be particularly useful when there is evolution of gaseous species during the measurement. The constant flow carries away the evolved gas, giving a constant environment to the sample :

Dynamic Vapour Sorption , or DVS analysis analysis is very widely used. A stream of carrier gas with a given vapour content can be easily generated: for example, by controlled mixing of a pure (dry) carrier flow with a vapour saturated flow.

DVS measurements are typically performed with constant pressure and total flow rate, to minimise the buoyancy and flow force effects.

DVS, or Gravimetric Vapour Sorption instruments of this type, are very cost-effective, and find particular application in the fields of foods, pharmaceuticals, and engineering and construction materials, where ambient moisture can have important effects.

The dynamic gravimetric method also allows the use of multiple sorbates, for measurement of competitive sorption effects.

These experiments generally require an additional quantification method, to analyse the change in composition of the gas mixture after the sorption process has taken place. For example, a mass spectrometer is used for gas analysis with the IGA-003.

A gas analyser can also be used to measure species which are desorbed from the sample when it is heated.

There is a number of different Temperature Programmed Techniques, where species released by desorption, decomposition or reaction products are detected. For example:

Some instruments which can help are: